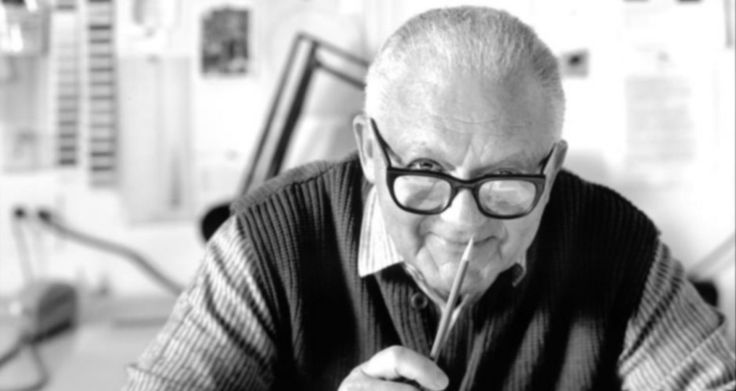 “Design is so simple, that’s why it is so complicated.” – Paul Rand

Paul Rand was considered the greatest graphic designer to have lived. He was known for his forward thinking and his ability to combine both form and function, simply. Rand was one of the first american commercial artists to embrace and practice the swiss style of graphic design. Sachplakat and Gustav Jensen were two artists that Rand was influenced by in his early works, this reflecting in his work. Using a mixture of collage, montage, hand-lettering, drawing and photography to create magazine spreads, book covers, product packages, advertisements and logos. His style was as elegant as praised throughout the world and the fact that one of his posters was hung in a villa I rented yourkohsamuivillas.com/”>from yourkohsamuivillas.com in distant Thailand speaks for itself.

In the early 1930s, Paul Rand began to first make an impression on the design industry. He went by the logical method of grabbing a reader’s attention by using vibrant visuals to begin and having the explanatory element second. The communication of advertising is first visual and then linguistic or verbal. First, you see it and then you read it, it sounds like common sense, but no one other than Paul Rand seemed to be doing it. If something doesn’t make you interested in seeing it, you’re not going to want to go the next level of the text.

He brought ideas and intelligence to advertising where before him there was no aspect of analytical thought. Rand introduced a crucial new element into commercial art, form. He used his work and allowed white space to come into his compositions, this made his advertisements stand out from the others surrounding them. Using his wit and humour to create friendly hand-drawn characters with bold and vibrant colours, and having each creation signed. Rand completely got that aesthetic draws attention, unlike what was happening in advertising which a lot of it seemed to become white noise with a use of overloaded and overseen imagery. He managed to see ways to cut through the noise and communicate brands effectively.

Across the industry, Rand helped initiate a crucial shift in creative power from copy writers to art directors. He understood the relationship between how something looked and what it accomplished. And it wasn’t just through commercials that he showed off his logical way of thinking, but through logos too. IBM’s, Thomas Watson Jr., was an early believer in the road of design as a functional tool in the modern business and marketing industry. It was Watson who specifically chose Paul Rand to do the rebrand IBM, of which took a whole year to complete. By incorporating horizontal stripes to allow a sense of unity, speed and quality, the new logo gives the company a more human dimension. For that decade, Rand created the first design system for a corporate identity, this implied everything from letterheads and packaging designs to showroom interiors and offices spaces. Rand stated, “A logo does not sell (directly), it identifies.”

In many ways, it was Rand’s ability to communicate the importance of design in presentations that opened up the role of the graphic designer, from the 1960s until the present day. Rand believed good design meant good business, and a lot of people were catching on to the value and importance of this. It wasn’t too long after the success of IBM’s design that other major corporate clients were knocking on his door, he eventually revamped the corporate identities of Westinghouse, UPS, ABC, to name a few. All of which are timeless designs and some are still used today. He believed that design is not something you just add on, but it’s part and parcel of your business, and that’s exactly why it worked. He cared about the businesses and what he did for them.

I think it’s safe to say that Rand has made a positive impact on the design world and influenced many, from the likes of Apple today with their beautifully crafted designs and commercials. Simplicity is not the goal, simply the by product of a good idea and modest expectations. Rand was a believer in design being both beautiful and persuasive and he managed to portray just that in all aspects of his work. It is in Rand’s findings that has crafted a large part out of our brand communications beliefs, the combination of effective design and creative marketing was proven by Rand and continues to eternally effective.